Here you will find information on the various ranks and awards which can be worn by members of the 275. Infanterie. This is far from a complete list of ranks and awards, these are simply the ones which may be worn in this unit. 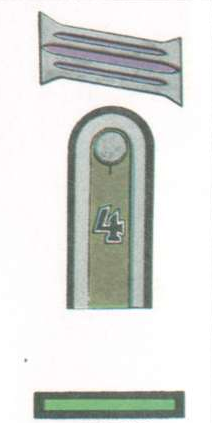 The lowest grade of NCO, Unteroffizier is a rank which is only to be worn if unit attendance at an event is greater than 10. Otherwise, the highest rank to be worn is Obergefreiter.
The Unteroffizier can be identified by his insignia. His shoulder boards bear tresse on three sides, and his collar is edged with tresse. He wears a single green bar on the sleeve of camouflage garments.

The Gefreiter is the second highest grade of private in the German Army. He may be put in charge of various detachments of the squad, or may serve as a liaison between the Gruppenfuhrer and the rest of the squad. He can hold any role in the squad, from machinegunner to rifleman. In the 275. Infanterie, the gefreiter is hand picked by the Gruppenfuhrer to act as a second in command and personal advisor.
The Gefreiter can be identified by the single chevron worn on his left sleeve.

The Obergrenadier is the German equivalent to the American Private First Class. This is the first rank earned by members of the German Army. In the 275. Infanterie, Obergrenadiere are chosen based on quality of impression, effort given toward the unit, and good behavior. Obergrenadiere can be identified by a single pip worn on the left sleeve of the uniform. 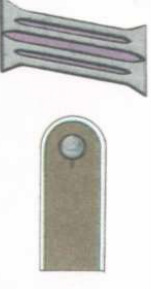 The Grenadier has no rank. The majority of the 275. Infanterie will be Grenadieren.  The Grenadier wears no insignia on his sleeve. He is the rifleman, and the backbone of the infantry squad. In the 275. Infanterie, this is the rank that recruits will begin at. In order to be promoted to Obergrenadier and/or wear any awards, the recruit must complete PHASE ONE and PHASE TWO of the required uniform/equipment requirements

The black wound badge was originally awarded to soldiers who were wounded once or twice by hostile action. In the 275., however, it is earned by successfully attending twenty events (in a row) without injury which requires medical attention. This encourages our members to act responsibly and to avoid irresponsible persons. The badge is worn on the left breast pocket of the tunic.

The Infanterie Assault Badge in Silver was originally awarded to soldaten who:

The War Merit Cross Second Class with Swords was originally awarded to soldaten who demonstrated exceptional service in the Armed Forces, going above and beyond the call of duty, but not to the extent which would warrant the issue of the Iron Cross.

In the 275. Infanterie, we award this medal only to members who attend every single event in a given year. This award is the most difficult to obtain of all of the Unit's awards. Men who earn this award should wear it with pride.
On the combat uniform, the medal is worn in the form of a ribbon in the second buttonhole of the tunic.
Powered by