Researching a WWII German unit can be difficult- far more difficult that researching an American or British counterpart. The reason for this is simple- Records simply either weren't kept as well or have been lost to the ages. However, we were able to dig up quite a bit of information as well as a handful of photos of the men who made up the 275. Infanterie.

German infantry divisions were different than American ones because for the most part, they wore no unit distinctive insignia, save for some of the elite and panzer divisions, and the SS. But to research photographs of a Heer infanterie divisions is a difficult task because it is almost impossible to definitely identify German army troops by photograph alone. One of the most dependable ways to find and identify photos of German troops is to look to the enemy, American Army photos, which for the most part have very accurate and reliable original captions and write ups to go along with them. This leads us to our first photo study, a US Army Signal Corps photo of an MG team of the 984. Grenadier Regiment, 275 Infanterie Division who perished in combat. 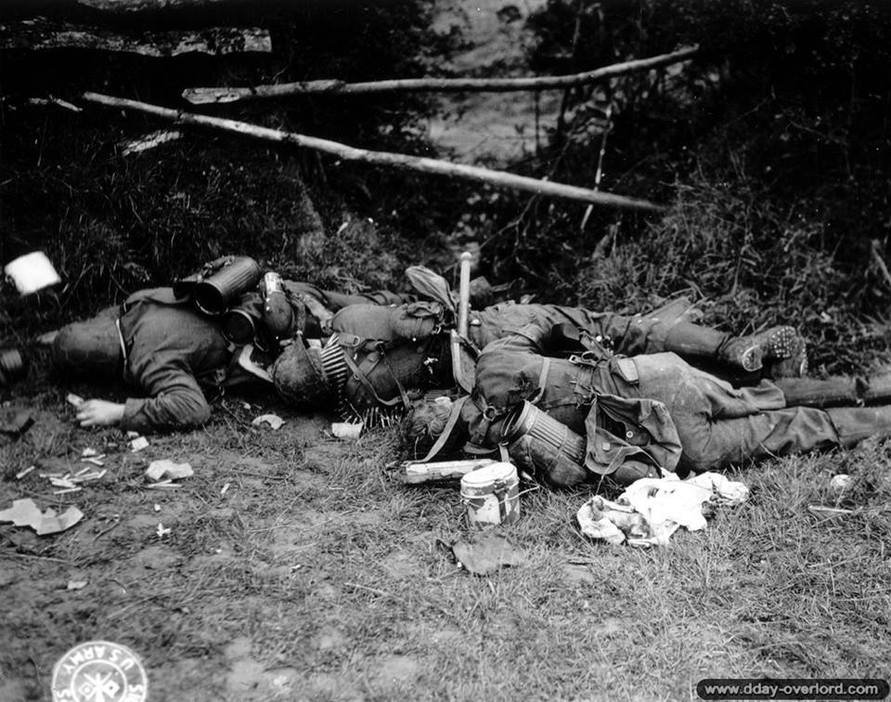 This photo, however tragic, has become an important research tool for us, as it shows a very clear layout of the equipment worn by the very troops we represent. A few items worth noting:
-At least 2 of the 3 men visible in this photo wear jackboots, which were the minority by this stage in the war
-At least 2 of the 3 men have light tan colored Ersatz "Presstoff" shovel carriers.
-Both men who are seen with helmets on wear large-hex chicken wire which covers the entire shell.
-The man closest to the camera has a gas sheet strapped to his canister. If you zoom in on the photo you can see that he has painted his Erkennungsnummer along the upper edge, which is unfortunately unreadable.
-The man closest to the camera is carrying a spare barrel carrier for the MG as well as a rifle grenade pouch on his belt. He also has a D-ring belt loop with no evident equipment attached to it. His wallet is visible stuffed into his right buttock pocket, he is wearing M-43 Keilhosen.
-The man in the center wears late war web Y straps, which appear to have a rear strap made of a darker material. This material may be leather, or it could be an illusion of being cast in shadow.
-There are loose bullets and cardboard ammunition boxes scattered around the remains, from this we can infer that the men were carrying them with them in the boxed state when they were killed.
-There appears to be a gas mask filter barely visible on the left edge of the photo, from this we infer that at least one of the men kept his gas mask rather than using the canister for other uses.


The next photos which will be studied are a series. They are all of photos of 275 Infanterie soldaten taken prisoner in the town of Mons, France by the US 3rd Armored Division. 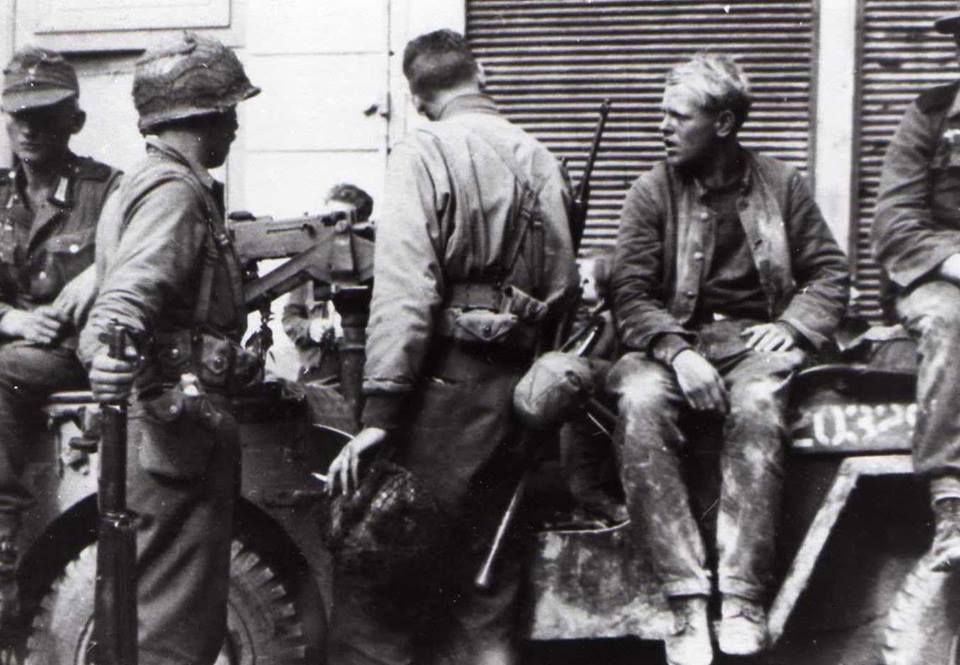 The first photo in this series shows two American soldiers, and 3 German soldiers. The Germans here are seen wearing dark colored piping on their Schulterklappen. This dark signature in a black and white photograph means that these men were Pioniers of Pionier Regiment 275., 275. Infanterie Division, which we know to have been in Mons at the time of this photo being taken.  Of particular interest is the blond haired gentleman sitting 2nd from right.
You will notice several interesting things about him.
-He wears no gamaschen.
-He wears what appears to be a drillich work uniform.
-He wears his equipment belt under his jacket.
This is confusing and we can't come up with reasoning. One possible explanation is that he is a civilian being interrogated by the American troops, as we can see civilians in the background of this photo and the next in the series.
The man on the far left can be seen wearing an M36 tunic with no shirt underneath, with lowboots and gamaschen.

Here we see another angle of the same scene as the photo above. In this photo, the capless blond man has moved to the hood of the jeep. It is interesting to note that the men wear early war schulterklappen on late war uniforms. Unfortunately the photo is not of a resolution necessary for up close study. The original caption can be seen to the right of the photograph. 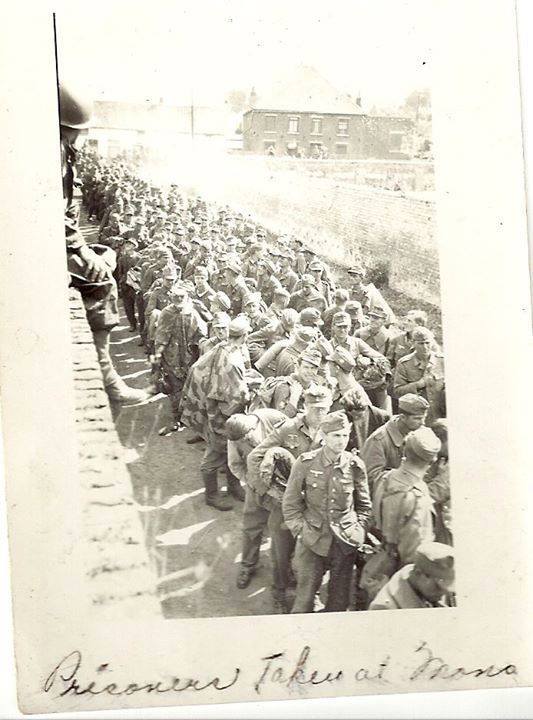 This photo of a prisoner column in Mons shows soldaten of the 275. Infanterie as well as 712. Infanterie. It is a shame that this photo is not a better quality as it would be a good reference for uniform variations. It is, however, an interesting input on the different styles of cap worn by the soldaten showing examples of every enlisted man's variation, even a fairly scarce "M42" style hat seen on the soldat with his hands in his pockets. A wide range of expressions can be seen on the faces of the soldiers, from wide, toothy grins, to grave, solemn scowls. 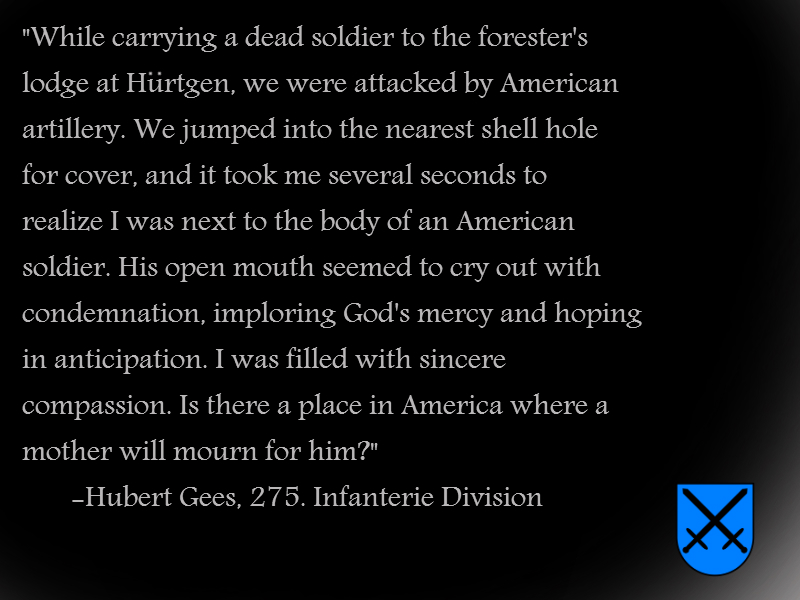 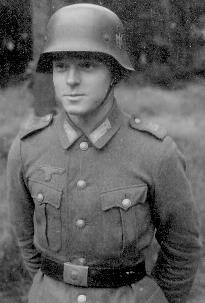 As a soldier in Fusilier Battalion (Major Rider) of 275th InfDiv, I wasn't deployed to the Merode area directly in the fall of 1944. The following is my experience of the deployment in the Düren area.May 1943       Paramilitary camp Mariawald near Heimbach/Eifel.


May 44 - 08/10/44 Assigned to 14th Company/Rifleman in tank unit of 275th InfDiv in the Lützow barracks in Aachen. Transfer to the Riemann barracks in Düren. That happened by foot march via Stolberg and Langerwehe. In Düren more and more vehicles columns passes through from France, mostly Luftwaffe.Sunday, 09/03/44 Alarm, to the front.

Werner Böttcher talked to his father in the barracks in Eschweiler and asked for my home address in case we lost touch.

We marched on foot with a group of maybe 20 men toward Maastricht, crossing the border in Herzogenrath - Kerkrade. West of Maastricht we took up our position at the Albert Canal. There we experienced the first American artillery assault. We had already experienced the mighty allied air forces in two bigger air raids at the Aachen Rothe Erde train station in late May 1944.

09/16/44 In the early afternoon advancing American tank troops broke up our unit near Bunde on the road from Maastricht to Sittard and I was assigned to Major Riedel's battalion. I never saw Werner Böttcher again. He fell there on 09/18/44 as his parents wrote to my parents in 1946. This letter as well as the first one sent to my parents on 12/04/44 show the sorrows and pain of people, especially people in a war zone.

09/19/44 American tanks, advancing from Waubach, drive us out of Scherpenseel. The bypass us to the right and set a few farms in Teveren on fire. They stop at the end of the village on the road to Geilenkirchen. We take up position at the southwestern edge of Geilenkirchen.

09/22/44 Our unit is taken out of the battle and we go to Gereonsweiler to rest. But as soon as we had fallen asleep in a farmhouse, under clovers of wheat, a new order arrives.

09/23/44 Early in the morning we reach Derichsweiler. Line up, review of the situation, and conferring an order by the commander, are followed by immediate deployment to the hill near Schevenhütte. Our battalion set up positions to the left, i.e. south of the road from Gürzenich to Schevenhütte. The town itself was occupied by the Americans as was the bath south to it. Our battalion's and regimental command post was to trigonometric point 312. The medical orderlies were also in that neighborhood. We destroyed the observation tower that stood high above Point 312 because it could have made an excellent directional target for the enemy artillery. Since I was company runner I had to run in between combat post Schwarzenbroich in the middle of the forest and another combat post, Hardt Farm, quite often. I remember well that a dam had been built across the forest aisle. That dam led south of Schwarzenbroich, near Point 312 into the main road.

Compared to what I have experienced between October 7 and November 28, 1944 southwest of Hürtgen, we had a rather quiet front-line here at Schevenhütte. Sure, there was artillery fire, but it remained palatable. Besides reconnaissance operations and unsuccessful minor assault troop missions we spent our time improving the dugouts.

Increasing combat could be heard, however, in the neighboring sector to the right, toward the Wenau forester's district. At night artillery shells flew above our heads to Düren.

Our enemy at that time near Schevenhütte was the 47th regiment of 9th US InfDiv. That regiment had been part of the 3rd US ArmoredDiv that had advanced to Schevenhütte in the Zweifall-Stolberg area.

It is of interest for me today that the 3rd US ArmoredDiv led the southern pincer at the end of March 1945. Here in my home area they met the troops that advanced north of the RuhrValley and encircled the Valley on 04/01/45. General Rose, commander of 3rd US Armored Div died here, at Paderborn, on 03/30/44.

I remember how a company of our unit was deployed to the Eschweiler- Aachen area in late September/early October 1944.
On 10/03/44 I wrote to my parents that I was billeted for a few days of rest in the house of farmer Heinrich Schmitz, Schlageterstraße 92, Gürzenich. It is the same house number today but the name of the street has been changed. Even the small bedroom window to the street on the upper level of the house, at the side facing Schevenhütte is still there.

Our company troop leader, Corporal Zeppelfeld with whom I shared the room, fell on the first southwest of Hürtgen on October 7, 1944, in the counterattack against the Americans who had achieved a breakthrough the day before. The train of our fusilier battalion brought supplies from Düren-Rölsdorf all the way to the "Seventeen Bends" way, southwest of Hürtgen. On Saturday/Sunday, 10/21+22/44, I was there for a brief stint to get new clothes. We fired a few salvoes in honor of a fallen comrade at his funeral in Gürzenich. I slept in the blacksmith's place in the middle of the village. Despite the new clothing I found 2 or 3 lice in the bed the next morning. I still felt embarrassed by that in those days. When I had to go to the train that had just been moved to Birkersdorf for a night, just before the big air-raid on Düren, the lice were the reason I declined the friendly offer of a family who had an extra bed and slept in the cow pen. Men of our company fell in the air raid at Düren.

My company leader, Lieutenant Friedrich Lengfeld has found eternal rest in grave No. 38 of the community cemetery in Düren-Rölsdorf. He was a company leader I could never forget; a true soldier, even in his dealings with the enemy. It is a tragedy that he had to die in the morning of 11/12/44. He was trying to help a severely wounded American soldier, who was crying for help after having been hit between the lines, when he himself stepped on a land mine.

The way to the Hürtgen Forest led me to his grave after a meeting with American veterans on 09/20/89. This was the first time that I dared to walk into that area that had been covered by mines, south of today's soldier cemetery in Hürtgen. I found the sunken structures of our company command post rather quickly, at a narrow path south of theminefield "Wild Boar." This was the dugout I had last shared with Lieutenant Lengfeld.

I was very happy to receive a picture of Lengfeld after a prolonged search, last November. I had already received a picture of my comrade Alfons Bösl, also a runner, who had fallen prey to a mine on 11/17/44 at the combat post Hürtgen. He had carried a dead soldier to the command post that we had recovered. His descendants sent me the photograph. 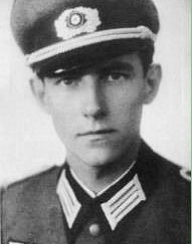